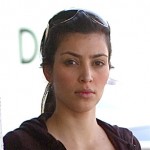 Social media/PR maven and friend, Sarah Evans, let me know Armani paid Kim Kardashian $25K for 1 Tweet.  It drove 40,000 people to the Armani website in less than 24 hours.  Is she worth it?  I had some questions considering:

Michael Corleone said in The Godfather, “it’s not personal, Sonny; it’s strictly business.” Maybe it is worth it when you consider:

While Armani did not release sales, if 1% (400 people) of 40,000 that went to Armani web site that day spent $62.50 (a conservative average sales per person considering what Armani sells), the tweet would have paid for itself.  It 2% went, or that 1% spent $125.00 on average, the ROI would be 2-to-1.
As Kim’s case demonstrates, you see results almost instantly in social media.  It’s quantifiable and accountable.  My guess is we’ll see more celebrities tweeting for brands.
Do you think Kim Kardashian is worth $25K a tweet?