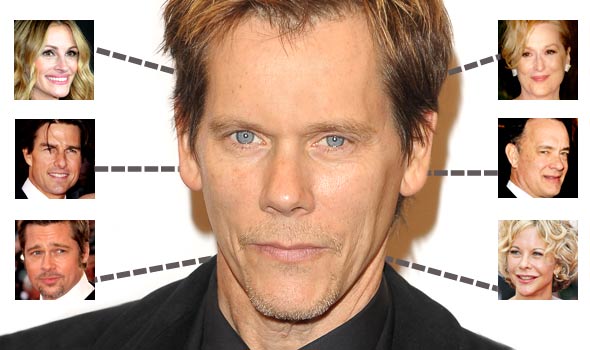 The idea behind 6 degrees of separation is, through “friend of a friend” connections, everyone is only 6 steps away, by way of introduction, from any other person.
The theory was originally presented by Hungarian author, Frigyes Karinthy, in a 1929 short story.  It was a popular play in 1993 written by John Guare and then a trivia game called Six Degree of Kevin Bacon that Kevin turned into a charitable organization called SixDegrees.org.
The theory was first tested in 1967 by psychologist Stanley Milgram from 296 volunteers who were asked to send a message by postcard, through friends and then friends of friends, to a specific person in a Boston suburb.
The idea of 6 degrees of separation was responsible for the early thought behind social media.
Is the theory true? Here are 5 studies that prove social media is less than 6 degrees of separation.
1. FACEBOOK PROVES IT’S 4.74 DEGREES OF SEPARATION: Scientists at Facebook and the University of Milan reported the average number of acquaintances separating any two people in the world was not six but 4.74. The experiment took a month and involved all of Facebook’s 721 million users. The study, released in November 2011, found that the average number of links from one arbitrarily selected person to another was 4.74. In the United States, where more than half of people over 13 are on Facebook, it was just 4.37.
2. TWITTER SHOWS IT’S 4.67 STEPS: In a study of 5.2 million Twitter friendships (friend and follower relationships), Sysomos, found the most common friendship distance is five steps. (The average distance is 4.67 steps). The second most common friendship distance is four steps. On average, about 50% of people on Twitter are only four steps away from each other, while nearly everyone is five steps away. After visiting an average of 3.32 people within the friend network, Twitter users can expect to find one of their followers. The results, released in April 2010, are:

3. LINKEDIN IS SET UP ON 3 DEGREES OF SEPARATION: Although LinkedIn has yet to do a study of the magnitude of Facebook or Twitter, LinkedIn, perhaps more than any other social network, was set-up about the idea of degrees of separation. In LinkedIn case, it’s 3 degrees of separation which are:

The value is not only less degrees of separation but more opportunities to form relationship as this chart shows:

4. MICROSOFT PROVES IT’S 6.6 STEPS: Conducted in 2008, Microsoft looked at 30 billion conversations among 240 million people fron its Instant Messenger product to construct a communication graph with 180 million nodes and 1.3 billion undirected edges, creating the largest social network every constructed and analyzed. It found the average path length among Messenger users was 6.6 steps. It also found people tended to communicate more with each other when they were a similar age, language, and location, and that cross-gender conversations were both more frequent and of longer duration than conversations with the same gender.
5. EMAIL STUDY SHOWS 5 TO 7 DEGREES OF SEPARATION: In 2003, Peter Sheridan Dodds and his colleagues at Columbia University conducted a modern version of 6 degree of separation through studying e-mails on the Internet. They recruited over 60,000 participants from 166 different countries for the experiment. By factoring in the rate of dropouts, the researchers calculated a median chain length of between 5 to 7 people.
These studies show there is no shortage in diligence trying to show if the theory behind 6 degrees of separation stands up in social media. Do they prove it to you?