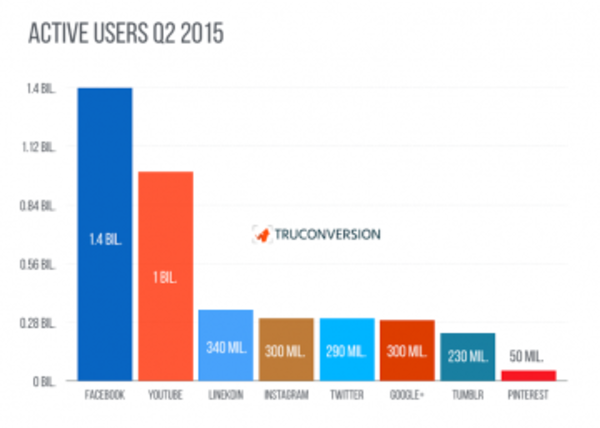 Guest post from Nora Flint at TruConversion.
If you think you’re going to hit the social media jackpot just by setting up a Facebook page and creating a Snapchat account, you’re fantasizing.
The landscape has evolved; there’s way too much noise, and users are tired of constant self-promotion.
The good news is, the social media platforms are bigger than ever before. That means, there’s much more you can potentially achieve in terms of reach and brand awareness.
Some brands are doing amazing things in social media. They’re the ones who get it right. So while social media got huge, the rules to succeed changed. Showing up is just not enough.
To help you develop the right social media strategy, we looked in some of the most recent statistics and here’s what we learned.
1. Weekend Posts Generate a Far Better Engagement on Facebook
Sounds obvious, right? Well, the surprising thing is that only 18% of all Facebook posts are shared over the weekend, according to TrackMaven.
The website analyzed over 1.5 million Facebook posts from 6000 brands and the results shown that weekend posts generate 25% higher engagement.
2. Facebook Engagement Levels Vary by Industry
Here’s an interesting data. Interaction levels vary by industry as it all comes down to the type of content people like to talk about.
Depending on what kind of industry you’re in, you may find it harder or easier to create and engaging content, according to SocialBakers. 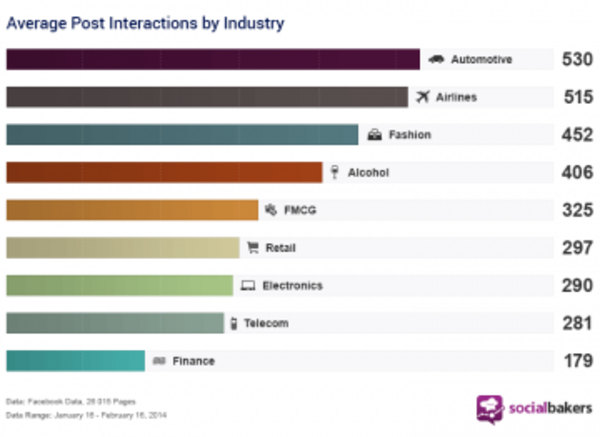 3. Facebook Posts With Hashtags Get 60% More Interaction
When we say ‘hashtags’ people automatically think of Twitter or Instagram. It’s a feature that Facebook introduced just recently (in June 2013), so people don’t expect to see them as much as they do when they’re on Twitter.
The same study from TrackMaven revealed that posts with hashtags see 60% more interaction on average.
To get the most out of hashtags on Facebook, you should use them strategically and link your posts to trending topics and relevant discussions.
4. Video Dominates Otherwise Low Organic Reach on Facebook
Social media analytics company SocialBakers analyzed over 670,000 posts by 4,445 brands and found that native video content has the best organic reach of all types of content on Facebook.

However, the data from Ogilvy show that you can only expect to reach about 6% of your followers on Facebook. That’s a major decline compared to 50% reach a year before the study was conducted.
In other words, it makes sense to pay Facebook to boost your content through advertising if you want to reach someone. Obviously, this has a lot to do with the fact that Facebook, now a public company, has to show profits to its shareholders.
5. Youtube Has the Highest Engagement and Lowest Bounce Rate
Speaking of engagement, here are some interesting stats. Shareaholic analyzed over 250 million unique visits coming from social media sites, and it concluded that YouTube drives the best traffic. 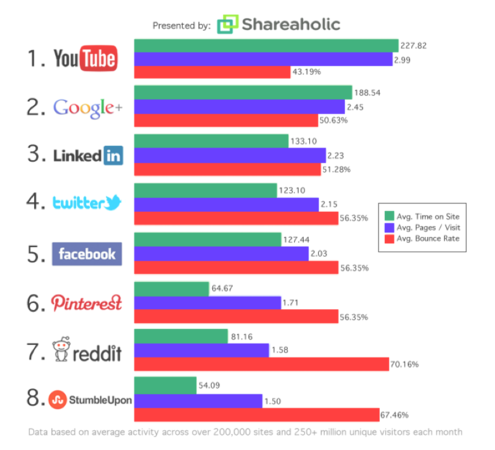 The traffic coming from YouTube shows the highest engagement and lowest bounce rate. A great example of integrating YouTube into your social media strategy is the #AskGaryVee show.
6. Instagram has the Highest Conversion Rate from Browser to Shopper
Engagement is a great metric. However, no level of engagement can beat the paying customer. At the end of the day, business with no customers is not really a business.
A 2014 study conducted by Olapic found that Instagram is not only the fastest growing social network, it’s also a leader converting your audience to paying customers.
And while Instagram is smaller than Facebook there are 2 more reasons why you should invest in your Instagram strategy.

The first one is the cross-posting feature. Once a user shares something related to your brand it can also reach all other networks of that user. The second is more simple; everyone understands pictures, no matter what language they speak.
7. Pinterest Converts Too, But it Takes Time
The first important thing to note about Pinterest is that it’s traffic is low engagement and high bounce rate.
The second thing is, it doesn’t work for every business. Your Pinterest strategy should to be aligned with it’s demographics (predominantly 24-35 y/o women) and the type of content that does well on Pinterest (fitness, travel, design, food, etc.).
The good news is, Pinterest converts pretty well. According to a study by Piqora, one pin is worth 78 cents in sales and the traffic from Pinterest is 10% more likely to convert than the one from Facebook.
But it doesn’t happen instantly. On average 50% of orders happen 2.5 months after the pinning.
8. Facebook Drives the Most Referrals
While data on Facebook reach isn’t too encouraging (unless you pay), it turns out that the users are more likely to click on the links in your post on Facebook than any other platform.
According to a study by Shareaholic Facebook is the top referral platform among all social media sites. 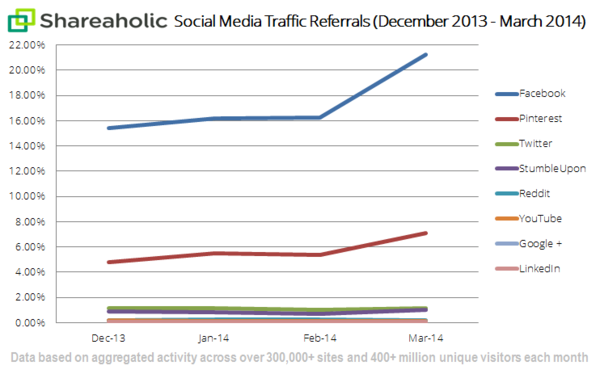 That’s an important information if you’re currently running a referral campaign. If you’re not, you should because referrals are the top way to bring down your customer acquisition costs. And as it turns out, Facebook can help.
9. Instagram Has the Highest Percentage of Viral Content
At the time when Facebook posts struggle to reach 6% of your own fans, Instagram is all about good news.

According to TrackMaven Instagram has the highest percentage of content going viral. Not only it outperforms all other social networks, it blows them away with 49% of photos and 60% of videos reaching 250+ interactions.
10. Your Top Promoters Have the Fewest Followers on Twitter
Focus on the super-users, the popular advice goes. Well, it turns out it may not be most viable strategy after all.
A social monitoring app Mention analyzed over 1 billion brand mentions on Twitter and on average 91% of those mentions came from users with less than 500 followers. 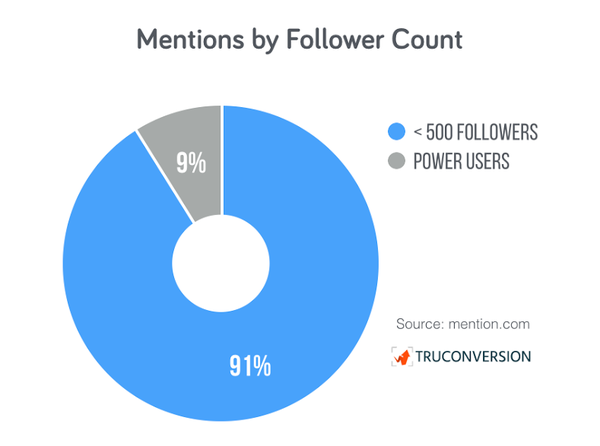 11. Content on LinkedIn Boast The Highest Level of Trust
And what about LinkedIn? It turns out it’s great for B2B. But that’s hardly surprising. What is surprising, however, is that the content published on LinkedIn can be quite effective.
According to a recent user study, LinkedIn users do not only value its content, they also actively seek it as a valuable source of industry news and professional advice. Especially men under 35.
As it turns out, LinkedIn can play a big role in your social media and content marketing strategy.
12. Twitter Users Expect a Quick Response
Twitter can be a great customer support channel. Among the companies using Twitter for customer service are the big brands like Tesco, Nike or Amazon.
It can also be a huge mistake if you don’t pay enough attention to it. According to Lithium study, 65% of Twitter users expect a response in less than 2 hours. 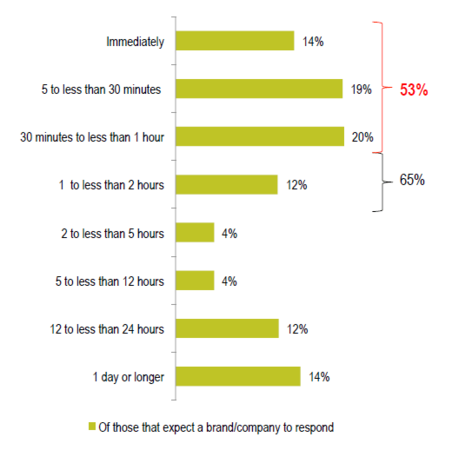 And not only that, 60% will take unpleasant actions to express their dissatisfaction if you don’t. In most cases these actions will include publicly shaming the brand on social media or spreading dissatisfaction in another way.
However, if you do respond quickly, you can expect to get a reward. For example, 34% are likely to buy from you, and 43% are likely to encourage friends and family to do so as well.
13. Seniors Are The Fastest-Growing Demographic on Facebook
More than 50% of U.S. adults over 65 are now using Facebook, according to Statista. Additionally, 63% of U.S. adults over 50-64 are also using it.
This makes Seniors 5x more likely to use Facebook than Twitter, where they represent just 12%. 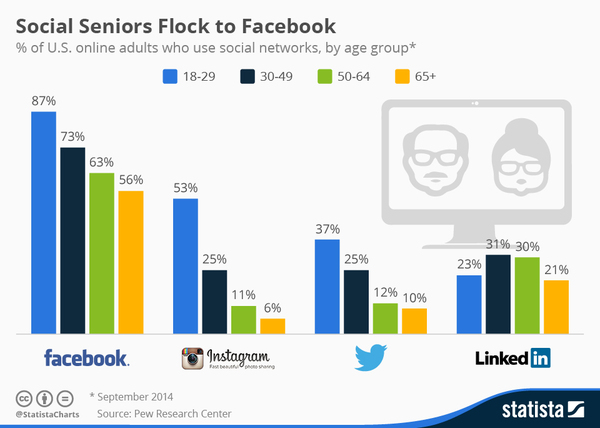 Millennials age 18-24 represent the most users on SnapChat, Vine, and Tumblr. In general, the 25-34 age group is the most dominant on Facebook, Google+, Twitter, Instagram, and Pinterest. LinkedIn stands out with 35-44 year-olds leading the way. 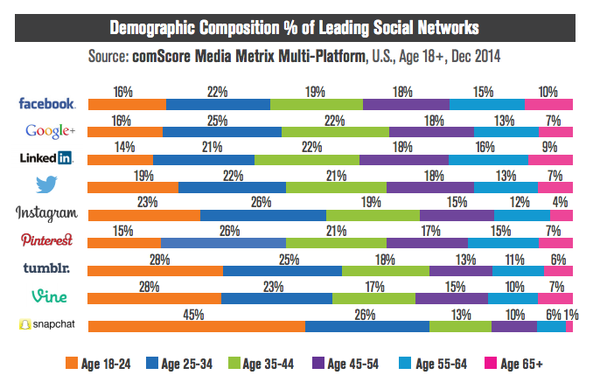 Source: Social Media Week
According to BI Intelligence, YouTube reaches more adults aged 18 to 34 than any single cable TV network.
14. Social Media has Greatest Impact on the Middle of the Conversion Funnel
According to AOL research, social media interaction usually happens in the middle of the conversion funnel.

This is basically the point at which your sales pitch happens. In other words, your strategy should be built around creating trust within potential customers and showing you can provide value to them.
The chart above also reflects that YouTube and Facebook are best for introducing new products to the market. They also show a greater impact on conversion than the other social media networks. Note that Instagram is excluded.
15. Email Totally Beats Social Media With an ROI of 4,300%
What has an email to do with social media? Well, it has a huge ROI. Much higher than any social media network.
According to a survey of the owners of e-commerce sites conducted by Custora, following chart is an overview of where these sites got their customers. 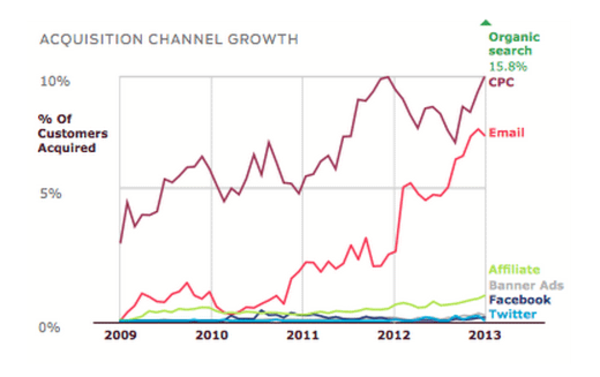 The clear winners are organic search, CPC, and email. This statistic only confirms that social media marketing does belong to the middle of the funnel.
What’s even more surprising is that marketing performance of email is getting better and better. Who would have thought after hearing media declare email dead on multiple occasions?
There’s also another metric which email completely dominates. Namely the customer lifetime value (CLV). It turns out email marketing crushes social media by a huge margin.

So what do you think? Which of these statistics has the greatest potential to impact your marketing strategy? Why? Let us know of your views in the comments section below.
Many thanks to Nora and TruConversion for such a comprehensive post. TruConversion helps you turn your abandoned website visitors into leads and future, meaningful sales.Start your conversions with TruConversion today
Found this article useful? Take a moment to share it using the social sharing buttons above.