Marketing automation refers to software automating marketing actions. It’s used to automate repetitive tasks such as emails, social media, and other website actions. It’s a case where technology makes tasks easier.
But does easier make it better? Although the numbers say half of companies use marketing automation, do they use it well or badly?
How to tell? Here are 8 very bad marketing automation practices.
All of these, unfortunately, have happened to me. Have they happened do you?
1. LAUNCH RIGHT INTO THE HARD SELL: On the internet, it’s hard to make yourself approachable. How to do it is provide thoughtful content your audience values without asking for anything; rather, you explore common interests until your prospect is ready to buy. This is called social selling. Yes. It takes time. But it delivers a prospect who feels they know you and is more ready to take action. Here’s what not to do. 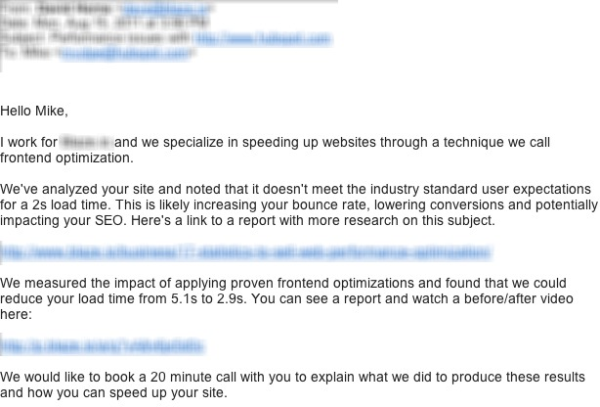 2. BRAG BEFORE KNOWING YOUR AUDIENCE: The best thing to do when sending a message to someone who doesn’t know you is show you understand them. The worst thing is brag about yourself. Here’s a good example of the latter. 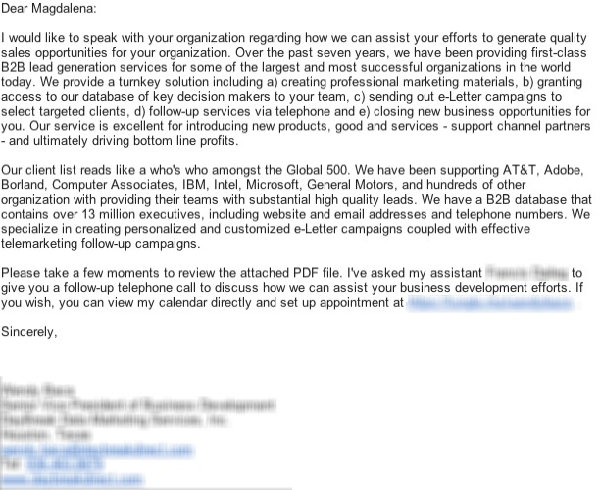 3. BELIEVE CLEVERNESS COVERS UP YOU’RE A PEST: More is not better with marketing automation. If someone hasn’t taken any action, they’re either not interested or not ready. A very bad idea is bugging somebody like this: 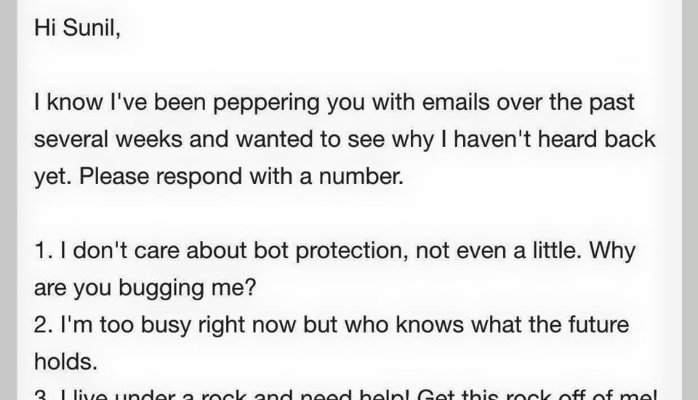 4. USE GENERIC SUBJECT LINES: Your first chance, and probably only, to make a good impression is the subject line or headline of your content. Here is a sampling of subject lines from emails I’ve recently received: “It’s finally here,” “I want you back,” “As per my last email,” “After checking your services,” “Am I still welcome here?” All have been generated by marketing automation. Why would anyone open any of these?
5. SET IT AND FORGET IT: Although marketing automation makes tasks easier, it can also make tasks much less compassionate. This is especially true in social media. Below is an automated Tweet from the journal American Rifleman, which is associated with the National Rifle Association. It was pre-set to forget. But it went out as details surrounding the tragic shooting at a movie theater in Aurora, CO were being released. The respond below the NRA Tweet was not set to forget. 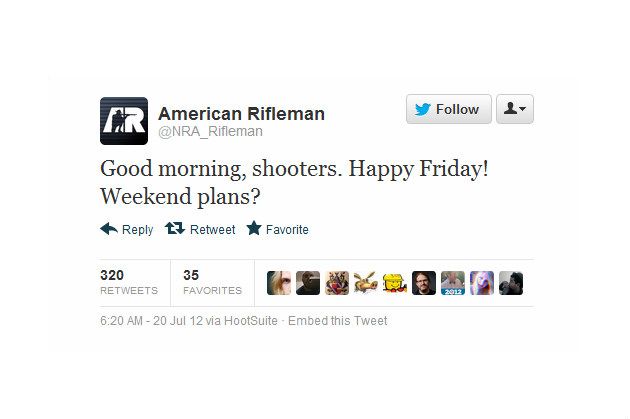 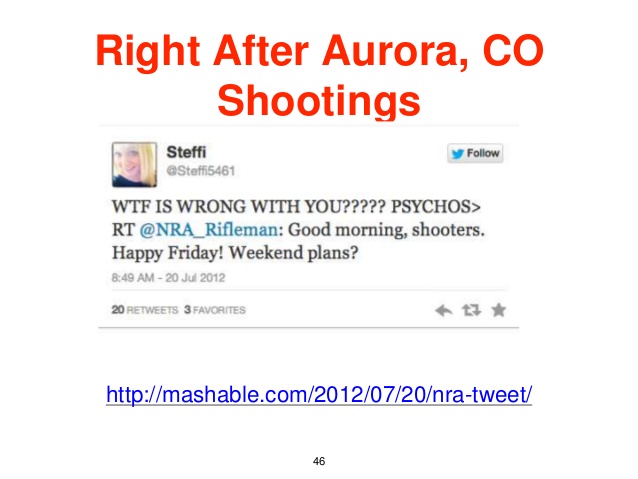 6. NOT ENABLING SOMEONE TO UNSUBSCRIBE: The CAN-SPAM Act is a law that establishes requirement for commercial messages, gives recipients the right to have you stop emailing them, and spells out penalties for violations. The law states:  “Once people have told you they don’t want to receive more messages, you must honor a recipient’s opt-out request within 10 business days.”
7. TURN A DRIP CAMPAIGN INTO A DOWNPOUR:  A Drip Campaign s a method used in direct marketing to acquire customers through repetitive marketing actions. It involves sending marketing information to prospects repeatedly over longer periods of time in order to nurture prospects or leads. After once opening an email generated by marketing automation, I received the response below in less than an hour. Obviously, something I won’t do again. 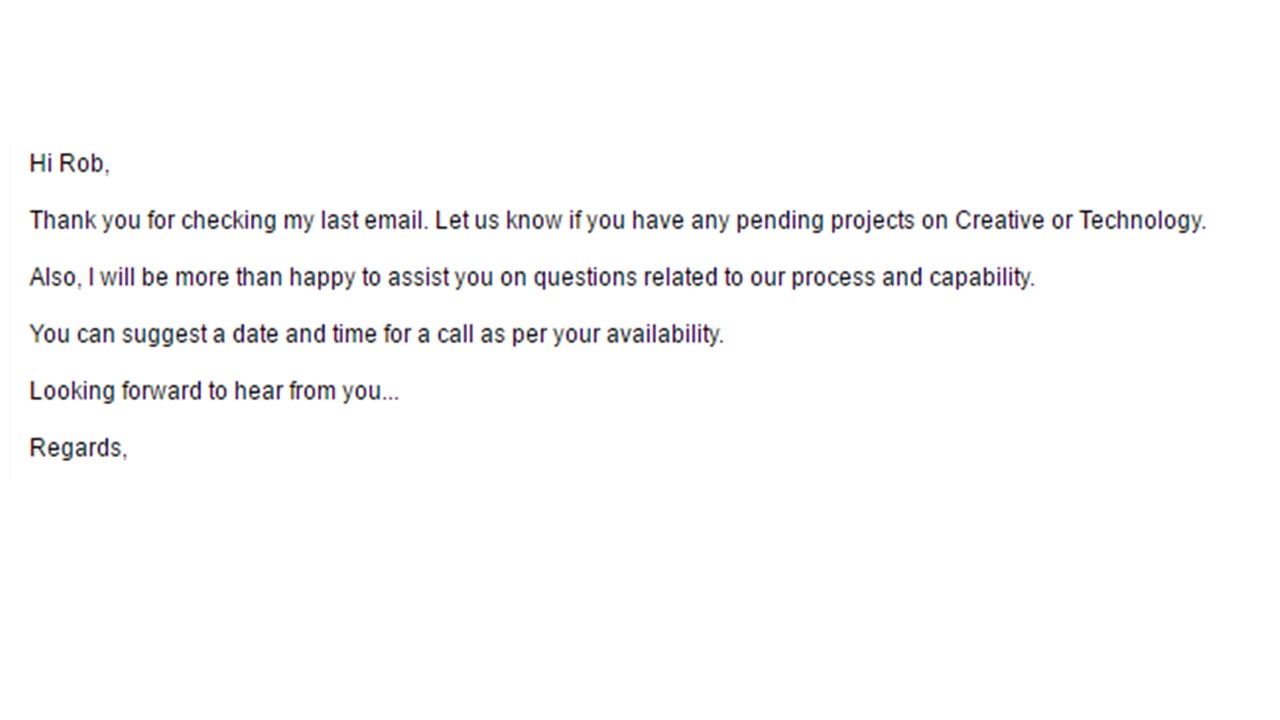 8. DON’T BE A SORE LOSER: To anyone who uses these bad marketing automation practices, my guess is you are not seeing any success. If you’ve ever written an email like this, you’ve come to the point where you have to seriously evaluate your use of marketing automation.

Do these examples of bad marketing automation practices help which what you should and shouldn’t do? Have any of these every happened to you?