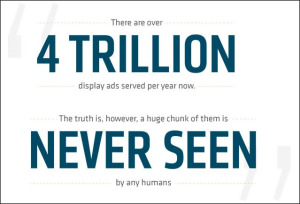 Impressions are a media metric used to measure ad delivery.
In digital media, an impression occurs when an ad is called and served by a web browser. Each time an ad is served, it counts as an impression. It is counted whether the viewer is able to see the ad or not.
Viewable Impressions are an improvement. The IAB established this definition for the industry so there is a metric and standard for viewability. Viewable Impressions require that 50% of ad creative is viewable for at least one second.
Why does this matter? If your business buys online ads, you probably expect the impressions you were promised and charged represent people who saw your ad. But this is not what’s going on.
A good percentage of your ad buy is likely siphoned off by parties who have no intention of letting people view your ad. A practice called Ad Fraud.
How does this happen? What can you do? Here are 34 clear facts to explain Viewable Impressions and Ad Fraud.
WHAT PERCENT OF ADS AREN”T VIEWABLE?

REASON #2
Bots. The page is opened by a proxy server or bot (not a real person). This is a large percentage. 60% of internet traffic is bots.

REASON #3
Ad Fraud. This is the deliberate practice of attempting to serve ads from illegal ad servers with ads that have no potential to be viewed by a human user. It is a critical issue facing the digital marketing community today. 25% of online ad impressions are allegedly fraudulent.

WHAT CAN BE DONE?
Publishers, agencies and media buyer should be pro-active taking steps to maximize Viewable Impressions and minimize Bots and  Ad Fraud. Here is what they should be doing.

If a campaign doesn’t achieve a 70% threshold on Viewable Impressions, the publisher, agency or buyer should make good by delivering this threshold. That’s doesn’t mean they need to provide a refund. It means they need to guarantee the media delivery.
Clients should ask agencies and media buyers if they are getting paid directly or indirectly by ad networks. Agencies and media buyers should understand from ad networks how they are combating Bot activity and any fraudulent behavior.  Ad networks should not turn a digital blind-eye to publishers who intentionally use bots to make profits off of advertisers.
Publishers, agencies and media buyers all know. If anyone gives vague answers or otherwise disparages such questions, that’s a red flag. The simple truth is if they are not working with you, they are working against you.
Does this help you understand Viewable Impressions and Ad Fraud?  And what you can do about it? Before you place your next ad buy, do you need any guidance to achieve the Viewable Impressions you deserve?