It’s been said we watch the Super Bowl as much for the commercials as the game. Maybe that helps explain why this year advertisers, on average, paid $3.5 million (+$500,000 versus last year) for a :30 commercial.
This year’s Super Bowl reached a record 111.3 million viewers; 300,000 more than last year, the previous record holder. Social media proved commercials were the most talked about topic according to Networked Insights. 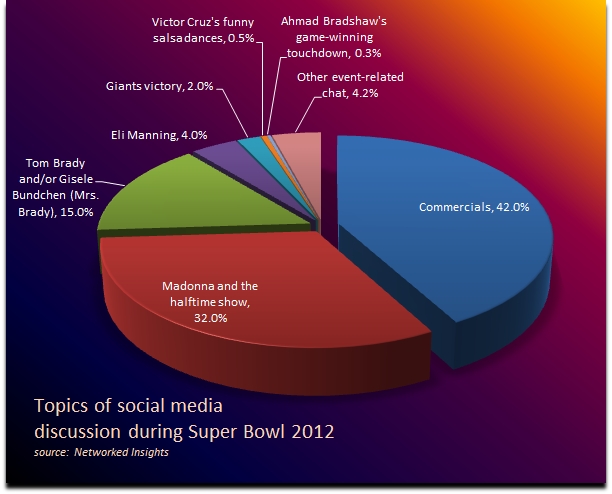 Super Bowl commercials don’t sell products so much as entertain, often with great storytelling. Even considering the cost, a primary benchmark for success is the Water Cooler Factor, the brand buzz and many conversations that occur after the game that cause us to like the brand and keep it top-of-mind throughout the year.
Super Bowl commercials are measured mostly by media metrics – Reach, GRP’s and Nielsen Ratings.  But, because “Like,” “Buzz” and the Water Cooler Factor are success metrics, shouldn’t social media measurements play an important role?
Here are 7 social media measurements that matter for Super Bowl commercials.
1. USA TODAY/FACEBOOK AD METER: This year, for the first time, USA Today and Facebook teamed up to create a People’s Choice award for Super Bowl commercials. People rated commercials by logging into their Facebook account on a 1 to 5 scale. Here was the people’s top choices for 2012 and the commercial voted #1:

2. YOUTUBE VIEWERSHIP: The amount of incremental traffic available to Super Bowl advertisers was no small number. In less than a week, viewership for many of the top spots shot into the millions. Many of the Super Bowl commercial available on YouTube were in extended, something only available in social media.
There were great verbatim testimony plus the ability to share with friends. It was the Water Cooler conversation happening right in front of your eyes. YouTube also had a voting contest called AdBlitz.
Here were the number of views on YouTube for the top spots as measured by the USA Today/Facebook Ad Meter and the #1 most viewed commercial in a length only available on YouTube
http://www.youtube.com/watch?v=_PE5V4Uzobc

3. YOUTUBE ANALYTICS: Not only can advertisers see the Water Cooler conversation happening before their eyses, but they can measure it in ways never possible through traditional media with YouTube analytics.
They’re a sophisticated and free tool that measures views, repeat views, where viewers came from geographically and globally, how long viewers viewed, where viewers dropped off and, of course, how many shared. YouTube is owned by Google so YouTube Analytics are modeled after Google Analytics. YouTube is also the #2 search engine after Google.
Think of the value YouTube Analytics offers, for example, Chrysler for their poignant commercial, “It’s Halftime in America.” It can let them know the viewership of every second of their extended length spot; what points in the commercial are most poignant and where the strongest sentiment for the brand is, geographically. Chrysler now has a social media resource for measuring and geo-targetting both the rational and emotional connection to the brand.
4. FACEBOOK SUPER BOWL PAGE: Facebook also had a Super Bowl page. Roughly 340,000 people “Liked” it, and over 200,000 people were “Talking About It,” a Facebook measurement with data available on Facebook Insights of the stories people created on the page. For the advertiser, they provided the opportunity to engage with potential customer, often on a local level.
5.TWITTER (TPS): The record breaking viewership of Super Bowl commercials was not only validated by Nielsen but by TPS (Tweets Per Second). In this year’s Super Bowl, there were 12,223 TPS during the game and 10,245 TPS during Madonna’s halftime show. Advertisers could have measured TPS while their commercial ran.
TPS this year showed a big increase from last year’s peak of 4,064 TPS. Why?  iPad and tablet use increased 10X in the last year, a strong bell weather for further jumps in TPS and where more Super Bowl commercials will be most viewed. 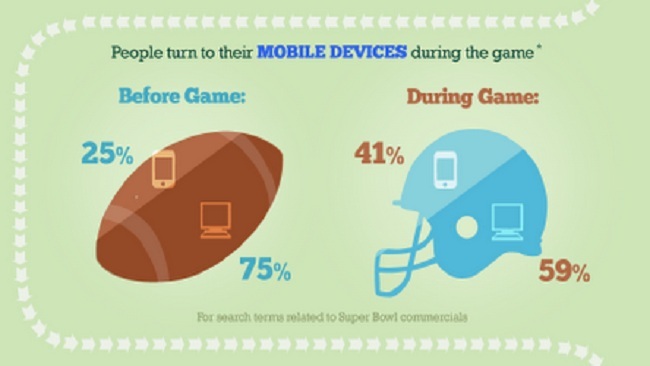 6. CELEBRITY TWEETS: In the volume of TPS, there was no shortage of celebrities who Tweeted. Kristie Alley, Alyssa Milano, Ashton Kutcher, Paula Abdul, Bette Midler, Jessica Simpson and Spike Lee were just a handful.
While celebrity Tweets haven’t crossed over from sport commentary to commercials, my guess is they will. If Armani paid Kim Kardashian $25,000 a Tweet, Super Bowl advertisers and the celebrities they engage are not likely to be far behind.
7. GOOGLE+: 75% percent of the social media chatter this year occurred on Facebook and Twitter according to Networked Insights. While Google+ wasn’t as much of a player, the percentages suggest there is room for one more. Google+ helps search engine optimization and plenty of people are searching while they watch the Super Bowl to help advertiser raise their visibility online and fill a consumer need. By next year, I predict Google+ will figure something significant out. 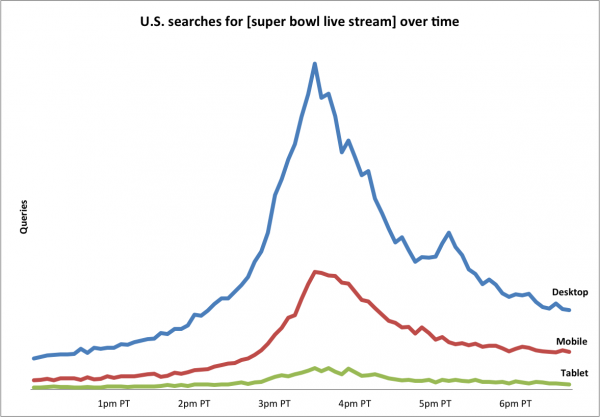 Do you think these measurements matter for Super Bowl commercials?