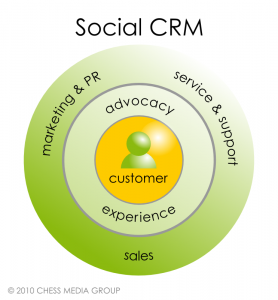 Many expect Social CRM to be a hot phrase in 2011.  It should be because the three most influential factors a person uses to decide whether or not to do business with a company are:

Source:  Cone Business in Social Media Study, 2008
Since Social media amplifies all three, it makes sense the terms, “Social” and “CRM,” belong together.
I’m a big believer in Social CRM but I think the phrase is still being defined.  One reason is the graphic above.  It’s very good but it is shows Social CRM as a concept that requires visualization to be explained.  Another reason is  two very smart people, when asked, give different answers.
Paul Greenberg, author and leading authority on SCRM, stated that Social CRM is “…designed to engage the customer in a collaborative conversation in order to provide a mutually beneficial value in a trusted and transparent business environment. It’s the company response to the customer’s owning of the relationship.”
Michael Fauschette says: “Social CRM is the tools and processes that encourage better, more effective customer interaction and leverage the collective intelligence of the broader customer community with the intended result of increasing intimacy between an organization and its prospects and customers. The goal is to make the relationship with the customer more intimate and tied to the company by building a public ecosystem to better understand what they want and how they interact with the various company touchpoints like sales, customer service etc…”
I favor a more matter-of-fact definition: Social CRM = a 1-to-1 sales relationship that occurs through social media and is profitable, sustainable and built on trust.
To substantiate, here are 16 case studies that prove Social CRM.

Regardless of how it is defined, do these 16 case studies prove Social CRM to you?