Last week, I had the pleasure of teaching a class on social media ROI at Rutgers and highlighted case studies in each of these areas. Rutgers is among the first universities in the country to offer a Mini-MBA in Social Media Marketing.  10 other teachers covered key topics in other areas of social media as well.
Questions from students made me realize, in addition to the numbers, all the case studies had one other characteristic in common: Courage.  Here’s  a sampling of the stories to explain why.
1.  INCREASED SALES (AJ BOMBERS):  After six month of break-even sales and no money for traditional marketing, Joe Sorge, the owner of AJ Bombers, a burger restuarant in Milwaukee, started using Twitter to attract customers.  Within a year, weekly sales increased +60%. What happened?   Joe spoke to the Rutgers’ class via Skype.  Someone asked why start tweeting?  In Joe’s case, he said, “I was sacred.  I opened a restaurant in Milwaukee at the worst time in the worst economy since the Great Depression.  I sat at my computer wondering how I could make this work. When I found people on Twitter talking about my restaurant and my burgers, I jumped in.”  Good feedback from customers on Twitter helped build relationships and Twitter followers soon accounted for 75% of AJ Bomber’s customers.  AJ Bombers now has 11,000+ Twitter followers, success with Foursquare, a “Food Wars” episode on the Travel Channel and the sales to go with it.  Joe recently started a company with Chris Brogan to help small businesses called Kitchen Table Companies with a show on The Pulse Network.  Here’s a video of a 2010 social media profile in courage.

2.  SHORTENED SALES CYCLE (BLENTEC): In 2007, Blendtec, a company that manufactured blenders since the 1970’s was having flat sales.  They produced commercials for YouTube that cost less than $1000.  Company sales then increased +700%.   The “Will It Blend” commerials featured CEO Tom Dickson.  Tom blended everything from broom handles to good balls to iPhones and iPads in Blendtec blender.  For a product who benefit has to be seen to be believed, video was the perfect medium. Some of the commercials have been viewed over 9,000,000+ times.  But the  company took a big risk.  They put their CEO out there where he could be viewed as either a charismatic presenter or a clown.  The benefits of that risk, and the courage of the management team, are shown in the viewership numbers from Alexa once the commercials started on YouTube. 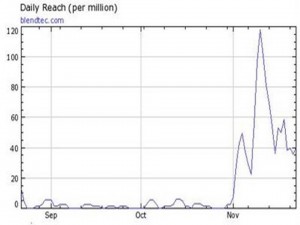 3.  HIGHER CLOSING RATIOS: (FISKARS): A 300 year old Finnish company that makes fine cutting tool created an online social community of crafting enthusiasts called  “Friskateers” to reach the underutilized channel of small retailers.  It resulted in a 3X increase in company sales.  But it didn’t begin that way.  According to Suzanne Fanning, Director of Communications at Fiskars Americas, it started as a way to have an “emotional bond with consumers.”  Try selling that to a company of highly rational engineers.  But once the community started swapping product stories and generating new ideas, resistance went away.  Now, Fiskateers are a major company driver of innovation.  Not to mention a major cost savings on traditional focus group research.
4.  NEW LEADS (FOILED CUPCAKES):  A Chicago company that bakes cupcakes generated 93% of its business through social media leads to surpass revenue targets by +600%.  But, the most impressive statistic is this company has no storefront (it sells only through a website) and no way for consumers to experience their product (before they buy) unless they establish a relationship with them through social media.  In an interview with Beth Harte, owner Mari Luangrath says, “we know every single one of our customers by name. We’ve probably had a good Twitter or Facebook conversation with them before they even call us.”  That’s courageous customer relationship marketing.
5.  LOWER OPERATING COSTS (IBM): Invested $100 million in company generated new product ideas and saw a return of $100 billion in total revenue for a 10-to-1 ROI with a 44.1% gross profit margin.  Best of all, they did by relinquishing control and letting employees set up the own blogs and “crowdsourcing ‘Jams'” to collaborate with one another globally.   There was no IBM corporate blog or Twitter account but there were 17,000 internal blogs, 100,000 employees using internal blogs and as many as 500,000 participants in company crowd-sourcing “jams.” IBM showed courage by relinquishing control.  It generated a huge amount of cash.
6.  DECREASE IN CUSTOMER ISSUES (BEST BUY):  Imagine if you said, “I’m going to poll my customers on the customer service they want and deliver it on their terms.”  That’s what Best Buy did in creating the TwelpForce, an employee community customer service group that works through Twitter to answer customers questions and concerns.  The employee community grew to 2,200 employees within 3 months and responded to over 13,000 customer questions, concerns, and opinions. The Twitter feed @twelpforce now counts over 32,000 followers and the number of questions averages 100-125 per day and is considered a key value-add by customers and the company.  My guess is Best Buy is having a very good Christmas season so far with the help of TwelpForce.
Colleagues tell me 2011 is likely to be a year where more companies embrace social media as a valuable marketing tool.  The graph below from Google Trends indicates social media is here to stay.  But courage, I’ve learned from these case studies that’s something that always supersedes trends.
Do you think courage plays a role in social media ROI? 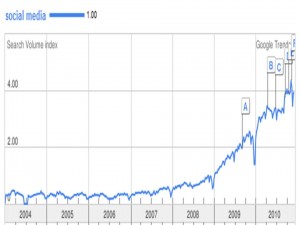